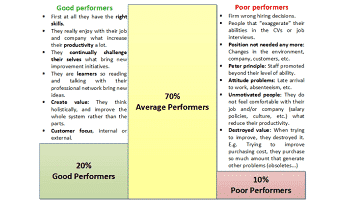 Jack Welch is a leader with followers and detractors. So we are going to analyze the 20-70-10 Rule that some people could say that is a worthy management tool that creates high performance teams, and others say that is a cruel tool because it fosters to fire 10% approximately of the less performer.

The 20-70-10 Rule can be categorized inside the concept of creative destruction (Joseph Schumpeter work). We mean the idea is not firing 10% of the staff to reduce cost rather than change poor performers for other people with the expectation that the new staff could be better. Thus, increasing the number of high performance people and raising the company results.

We should ask ourselves a few key questions in order to know if the tool is adding value or not to our organization:

In turnaround projects where poor management is an issue, one of the most important causes of the company decline is because we do not have the right people. It is not unusual to find in those firms 10% of poor performance staff. So in those cases “getting out the bus” that staff allow us to increase firm results, and accelerate the change management process bringing new people with new mindset and abilities to the organization.

We have to highlight that organizations have the responsibility preventing poor performers, and we can suggest to prevent poor performers: First, having good performers in key positions, because good performers do not use to tolerate the poor performance. Second, selection process should be excellent. Third, making a periodic follow up of the team and specially the new staff, because two or three months is enough to realize if new employees should continue or not. It is better to “get out the bus” people in the second or third month that allow continuing in the company.

Finally, while poor performers by definition are people who damage the organization, and “getting out the bus” those people would not be an issue for the company. What it is not clear for me is the following: as Jack Welch suggests continually changing 10% of the staff that worst performs (being categorized like poor performers although they are not necessary underperforming, just they are on the bottom of the list) is getting any return. I mean there is low risk changing the staff that underperforms, despite changing people that are not “really” underperforming is increasing the risk to get the worse staff. Additionally we are losing the investment done in our current staff, and we have to invest in finding and training new workers. Moreover, we are creating an unhealthy stress in the organization. So I would not personally recommend continually changing 10% of the staff just because they are the worst performers.