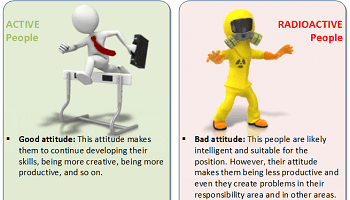 The first thing and probably one of the most important in turnaround is building the turnaround team. I mean dealing with people issue.

The external and internal turnaround teams

Normally in turnaround there are two teams. The external team that is a temporary project based team in order to facilitate and accelerate the turnaround process. This team must have experience in turnaround methodology and related disciplines like change management, cash flow improvement and so on.

My friend and expert in turnaround Keith Wiedersheim calls thess active and radioactive people “squirrels” because they are people quite self-incentivized to get up in the organizational chart of the company. Thus, they used to have their professional development as one of their life priorities.

Most of the time, “radioactive” people do not accept the changes because the turnaround process is reviewing the current situation, challenging people and status quo. They are willing to have more power playing the same “game” in which they feel comfortable but they are not well prepared to be challenged. Those people do not prepare for challenges and changes will realize soon that the turnaround rather than being a professional opportunity is a status quo threat. They will try to sabotage the turnaround talking with people close to them to get the opposition to the turnaround process. For those people every change will be a problem, and they will try to delay any action.

My recommendation is identifying quickly the “active” and “radioactive” people. Focus on “active” people to materialize quick wins. At the same time we can work “slowly” with radioactive people in order to communicate the new company direction and why. I mean given some time to get on board. I used to do this for three reasons: first, I believe that everybody merits an opportunity; second, it is faster to work with people that already know the firm that search for outside employees; and third, is quite unpleasant fire people. Unfortunately, my experience shows me that in the best case “radioactive” people can try to show you that they are on board but they are not. So they will take any opportunity to sabotage the project, even after the turnaround when the external team get out of the company.

To avoid misunderstandings, we have to explain better the point of report the mistakes of other people. In some activities like turnaround, reporting mistakes is important in order to explain why we must change and being able to track the benefits of the implemented changes. When we are reporting mistakes, we do not add names because we used to focus in processes’ error rather than in people error.

Solving internal conflicts should be an essential task for managers. Nevertheless, it is amazing how many managers focus on managing their internal conflicts with other areas, with the mother company, and so on but they avoid getting involved in the internal conflicts of their teams. Many managers expect that conflicts are going to be solved peacefully and quickly between the parties. However, the word conflict means that the situation has been deteriorated importantly and the intervention of someone with authority is needed it.

Companies cannot allow internal fighting situations for getting more organizational power, blaming rather than solving problems, and so on. Those internal fightings reduce the productivity of the teams and create a bad workplace environment. If those conflicts are not managed quickly and properly, it will affect the company services and even the profitability. For instance, you could find people who know there are some issue with the invoicing process. But they do not act because they prefer showing that their invoicing colleagues are doing a bad job rather than supporting them and solving the issues.

Some people could question decentralization for two reasons: first increase the salaries cost, and second control is more difficult. Inexperienced turnaround managers used to optimize part of the system like salaries costs rather the entire system. I mean many times expending a little bit more in salaries can bring important profits and accelerate the process to materialize those benefits. However, experience turnaround managers do not use to increase salaries cost importantly because they hire new people or make some promotions but at the same time they get out of the bus “radioactive” staff.

Turnaround is a transformational process. It is very difficult to transform a company or department without changes in the team. People used to listen to the “wake-up call” when they realize that the organizational chart is changing, some people leave their positions, other get more responsibilities, and new people with much energy and new ideas are arriving. One of the objectives of “new blood” is to reinforce the message that things are changing. Usually, new people in management positions are coming with a lot of energy and new ideas what can be a good “cocktail” mixed with some well-recognized company managers fully committed with the firm and the turnaround project.

We use many times “new blood” to decentralize the organization or to replace “radioactive” people.