HomeInsightsTurnaroundWhere Should We Start in Turnaround? The “Bunker” Concept

Where Should We Start in Turnaround? The “Bunker” Concept 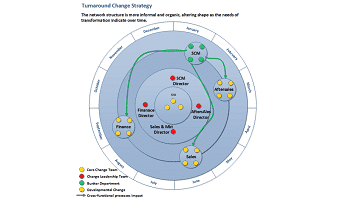 We could simplify the causes of decline to three: poor management, inadequate financial control, and incorrect sales approach. If the decline cause is clearly restricted to finance or sales, we must start in turnaround for that area. Although we must be aware that sometimes the initial decline cause identified is incorrect, because we would realize that there are more than one cause of decline (many times turnaround situations are much worse than expected initially). However, the commonest cause of decline is poor management, in that situation is more complex to decide where we should start.

One of the first things to do with the chosen “bunker department” facing poor management practices must be to review processes. Because processes are cross functional, the “bunker department” processes are connecting with other areas of the firm which are going to be reviewed indirectly. So the concept is starting the turnaround from one main department and using the connections of processes with other areas to expand turnaround activities to the rest of the company.

So if we agree to use the “bunker approach,” we must decide what it is the department in which we are creating the “bunker.” I suggest using supply chain or finance as a “bunker department” because those areas have strong links with the rest parts of the firm. Furthermore, those departments have the financial and operational control of the firm. Thus, any poor management practice in the company is likely being detected for those areas. However, turnaround people use to create bunkers in their areas of expertise. E.g. people with financial background create the “bunker” in the financial department.

Are you using a “bunker approach” or similar?  What is your area of expertise? Do you use this department as a “bunker”?